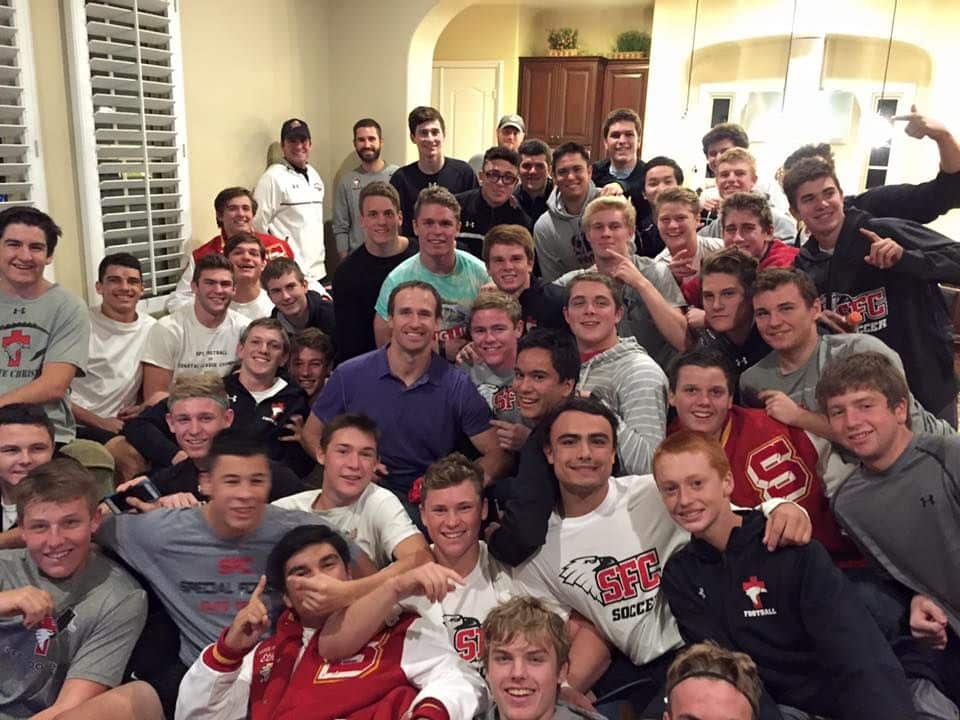 The Santa Fe Christian Football program has a tradition of having a team pasta dinner the night before every game. At these dinners, there is always a speaker to give the team a pre-game talk. For the most part, the speakers aren’t world famous professional athletes, but this week’s pre-playoff pasta dinner was different. NFL quarterback Drew Brees of the New Orleans Saints dropped in to speak to the boys before their playoff game.

With his NFL Super Bowl ring on, the NFL MVP talked to the football team about his favorite memories and what he values the most. “I will tell you that my greatest memory of playing football was when I was you guys. When I was playing high school football.”

With an enrollment of 400 kids in the high school, Santa Fe Christian is considered a small school compared to the local public schools which have 1,500-3,000 students. This small school environment allows the kids to build closer relationships, something Drew Brees can relate to. “Some of those guys, some of my teammates (from high school) are my best friends to this day…These memories are going to stick with you forever.”

It was a great opportunity for the SFC football team to hear from a future NFL Hall of Famer, and we hope his speech inspired the boys. Good luck SFC Football!!!

Don’t forget to follow the Eagles Football team and all of the other SFC sports on the official SFC mobile app.

Casey is a co-founder of REPu and leads the Product Development team. He's responsible for making the app user friendly and look amazing. He's also an opinionated foodie who leads a dinner club in San Diego touring new restaurants.